With Town Meeting approaching, residents may want to brush up on what’s been happening with regard to the State Hospital Property – see multiple meeting links below rich with details including public meetings of the committee and a presentation on the history of the land.  Trying to decide the best course of action for the property that formerly housed the Westborough State Hospital has been a hot topic in Westborough for years.  The State Hospital closed in 2010 and in 2011 the State voted to surplus the real estate.  Many residents wanted the town to get involved in the redevelopment, concerned over the negative impact the state’s potential development plans would have both on local services and on the property itself.

Slowly but surely, we’ve progressed to having local ownership (negotiated with state to purchase ~90 acres for $2.2M) and coming to a decision for how – or whether! – to develop this land on the banks of Lake Chauncy.

In late 2014, the Board of Selectmen appointed a committee (The State Hospital Re-Use Committee) whose sole purpose has been to focus on this issue.  The town and the committee have held several meetings for public input over the past few years. For anyone curious to go back through any of those discussions or decisions, Westborough TV has been capturing almost all of those meetings and makes them available for viewing below.  Also, materials are available on the town’s website. 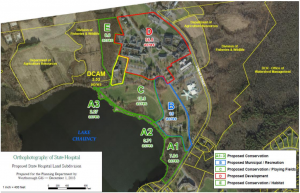