It’s a well-known problem in Westborough that needed some clever thinking to solve. After years of frustration and traffic snarl-ups resulting from tractor-trailers hitting the low clearance East Main Street bridge, town officials have finally reached an agreement train transportation company CSX that should resolve the situation. That solution? A drawbridge. 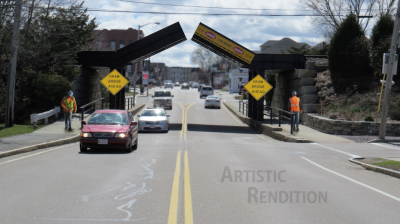 The proposal isn’t actually as far-fetched as it may seem. That’s because the East Main Street bridge was originally installed as a drawbridge back in 1840 when large trolleys traveled into Westborough piled high with materials critical to the Town’s sleigh maker industry. “When we looked more closely at the construction of the bridge, we actually found gear mechanisms still in tact from over a century ago, which should keep costs much lower than otherwise expected.”

Most people are familiar with drawbridges over waterways, which are retracted to allow passage for ships that are too large.  This new bridge will be designed in a similar fashion so it can be easily raised for tractor trailers that are too tall to fit safely underneath it.

The town will be utilizing a drawbridge firm from the Island of Sodor, which boasts some of the most well-known experts in the field of train depots, stations and bridges.

According to a statement from the bridge consultants, the town will continue to use the Overheight Vehicle Sensor System [show vehicle sensor image] – the laser warning system recently installed that measures a truck’s height before it has a chance to hit the bridge. In this case, that sensor will trigger the drawbridge.

The new bridge will be designed using a turbo encabulator, a complex process explained to us by consultant Dr. Emmett Brown. “Using a base-plate of prefabulated amulite, surmounted by a malleable logarithmic casing in such a way that the two spurving bearings are in a direct line with the pentametric fan. The main winding will be of the normal lotus-o-delta type placed in panendermic semi-boloid slots in the stator, with every seventh conductor being connected by a nonreversible treme pipe to the differential girdlespring on the ‘up’ end of the grammeters.”

Police Chief Alan Gordon said his department regularly receives reports of trucks either striking the bridge, or approaching the bridge and coming to a halt when they realize they may not clear the underpass. The traffic backup and the associated costs can be significant, which is why the Chief was thrilled with this proposed solution.

The agreement was signed on April 1st 2016 and work is expected to begin at some point soon and may be completed sometime thereafter.

6 Responses to "Solution for the East Main St. Bridge"