As the Local History Librarian at the Westborough Public Library, I have recently received requests for information about the history of the Westborough town seal, given recent discussions about replacing it due to its depiction of Eli Whitney’s cotton gin. The controversy centers on the cotton gin’s role in making cotton production in the United States much more profitable, which consequently preserved and prolonged slavery throughout the American South at a time when it was beginning to wane.

Beginning in 1899, every city and town in Massachusetts was required to have a seal after the General Court of Massachusetts passed Chapter 256, and town clerks were given the responsibility of maintaining their custody. Westborough’s first town seal began to appear on its Annual Town Report in 1913. The design is fairly generic, although to my modern eye it has an antique charm to it. 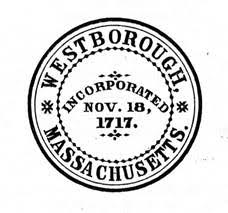 The original Westborough town seal as it appears on the 1913 Annual Town Report.

As part of the celebration of its 250th Anniversary in 1967, Westborough decided to change its town seal. According to the Commemorative Booklet for the celebration, art students from Westborough High School were invited to submit drawings for a new seal design. The Anniversary Committee ended up selecting four drawings to be used as a composite for the official seal: a sketch of the tower on Town Hall, an outline of a map of Westborough proclaiming it as the 100th town in Massachusetts, a “pie crust” edge around the seal, and a drawing of Eli Whitney’s cotton gin based on his patent. 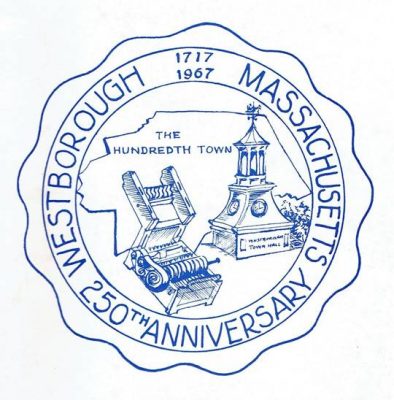 The new Westborough seal design, as it appears on the cover of the 250th anniversary Commemorative Booklet.

The new seal design appeared on the front cover of the Commemorative Booklet and was used to create a commemorative coin. On the reverse side of the booklet and the coin is another drawing by a high school art student depicting an “Indian lad in a deep forest setting.” The Westborough Center for History and Culture in the Westborough Public Library has one of the coins in its collection. 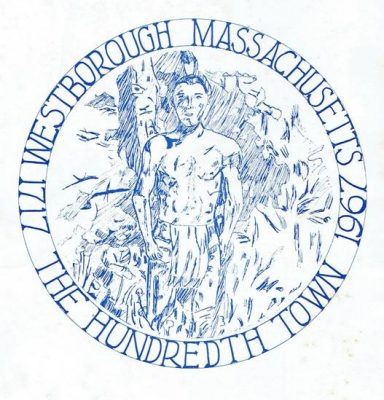 The back cover of the 250th anniversary Commemorative Booklet.

Eli Whitney was born in Westborough in 1765 and left the town for good in 1789 to attend Yale College. He received a patent for his cotton gin in 1794. Cotton gins had been around before Whitney’s invention, most notably in India, which dominated the world’s cotton market well before the American South began producing and exporting cotton. But the particular strain of cotton that grew in the South had fibers that were tightly attached to its seeds, and the Indian cotton gins could not separate the two.

Whitney never realized the profits he expected to gain from his invention. Instead of selling cotton gins directly to cotton growers, he and his partner decided to charge farmers to clean their cotton for them, much like grist mills charged to grind corn or wheat. The simplicity of his cotton gin design made it easy to copy, so the two ended up using all of their profits to fight patent infringements and the company went bankrupt in 1797.

The Westborough Center for History and Culture holds the local history collections at the Westborough Public Library and has resources for exploring, creating, and celebrating what it means to live in Westborough. Many of its programs and resources can be accessed online at www.WestboroughCenter.org.