WTV recorded the June 9, 2016 presentation at MassWildlife: American Chestnut Restoration in Massachusetts. Watch the full presentation here.  Most people are unaware of the enormous ecological disaster that the loss of the American Chestnut tree represents. Blightresistant American Chestnut seedlings, painstakingly developed and now planted adjacent to MassWildlife’s Field Headquarters, are a major step toward reintroduction of the species into the wild. Lois Breault-Melican from the American Chestnut Foundation discussed the history and future of this important tree. Participants had an opportunity to view a large seedling farm adjacent to the Mass Wildlife Building in Westborough where blight resistant chestnuts are being nurtured. 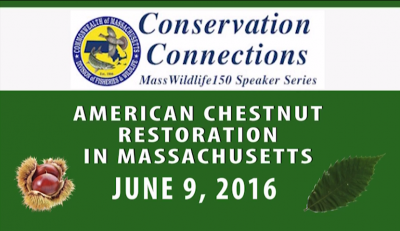