Veterans Corner was fortunate to have Retired Navy Captain James Nolan on this month’s episode. 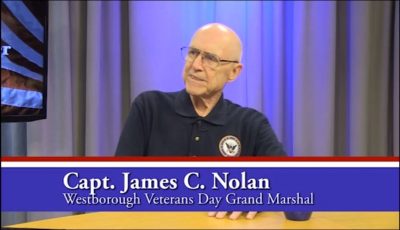 Host Patrick Tracey sat down with Capt. Nolan to highlight his long military service in the U.S. Navy and Navy Reserve. Jim is a U.S. Navy veteran and Naval Reserve Officer that served in the Navy on active and reserve duty from the 1950s to the 1990s.

Capt. Nolan will serve as Grand Marshal in the Westborough Veterans Day celebration. (Veterans Day events are listed below.)

Outside the navy, Nolan expanded his involvement with United Fund Boston, became a director for Catholic Charities, had a career at the MBTA as a transportation planner and for 15 years was a senior lecturer for Northeastern University in its evening business school program

Since moving to Westborough, the family has been involved in various aspects of the community. Nolan continues to sing in the choir at St. Luke the Evangelist and with the Journey Home Singers as well as being the “piano man” for the Willows at Westborough.

09:00 AM: VFW Post 9013 on Milk Street. All participants meet for coffee and pastries

NOTE: No parking at the Fire Station. Please use VFW or on-street parking.

09:30 AM: Bus departs VFW Post for Minuteman Park. Master of Ceremonies Al Tournas will introduce State Rep. Hannah Kane to say a few words and present the wreath. Father Jesse Abell – from St. Stephen’s Episcopal Church will give the invocation. The VFW l9013 Honor Guard will fire 3 volleys of rifle fire followed by Ellah Gelber and Tim Chen buglers from the WHS band playing of TAPS.

10:10 AM: Bus departs for the Pine Grove Cemetery. MC will introduce State Reps. Carolyn Dykema and Danielle Gregoire to say a few words and to present the wreath. Reverend Victoria Larson from Good Shepherd Lutheran Church will offer a prayer. The VFW Post 9013 honor guard will fire 3 volleys of rifle fire followed by the buglers from the WHS band playing of TAPS.

10:35 AM: Bus departs for Forbes Municipal Building for services and wreath laying ceremony. MC will introduce the Board of Selectmen Chairman Ian Johnson who will say a few words and present the wreath. MC Al Tournas will introduce our Grand Marshal James C. Nolan to speak. The MC will introduce Pastor John Taylor of the First United Methodist Church will lead us in prayer. MC will introduce the Westborough High School all male a capella group Members Only led by Asad Soomro and including Cole Anderson, Chase Crandall, Luke Capello, Ian Chace, Ronan McGrath, Damien Moore, and Ryan Wickline to sing our National Anthem.  The VFW Post 9013 honor guard will fire 3 will volleys of rifle fire followed by the buglers from the WHS band playing of TAPS. This will conclude services at the WWI, WWII, Korean, Vietnam, and Gulf War Memorials.

11:15 AM: Participants that wish to march to the Westborough Rotary services will do so at this time and those who wish to ride the bus may do so.  All veterans are encouraged to join us.

11:25 AM:  At the Rotary Service the MC will ask Selectmen to present the wreath.The MC will introduce Pastor John Taylor of the First United Methodist Church to offer an invocation. This will be followed by members of the VFW Post 9013, firing 3 volleys of rifle fire and by the buglers  from the WHS band playing of TAPS. We will conclude all services with a final word of thanks to our invited guest and all participants. A special thanks to the Westborough Fire, Police, DPW, Senior Center and High School for their continued support..

NOTE: All the above times are estimated in this brief schedule of events.

AT CONCLUSION: Commander Raymond Fittzgerald offers collation for participants and invited guests at the VFW Post 9013 on Milk Street.