Christopher Noonan and Luanne Crosby continue their popular architecture tours of historic Westborough with this first tour of 2018, starting at 1:00 PM on Sunday, May 6, 2018 on the steps of the Westborough Public Library on 55 West Main Street.

Walk the 18th and 19th century residential neighborhoods where early “cottage” industries, from shoes to blacksmithing, flourished and began to feed into the Main Street mercantile trade. As we meander Ruggles, Charles, School, Cross, Harrison and Myrtle (the Village Southwest Quadrant), we will experience how this section of the Westborough village grew over the 19th century. Join in the interactive discussion about early 19th century architectural styles and appropriate historic exterior colors.

We will also tell the story of John Ruggles, father of the US Patent Office, and the importance reflected in a street name. Can a late 19th century barn/outbuilding find a new life in the 20th century? How does one historic property have an interesting evolution as an Admiral’s home, later the town’s first permanent Congregation of B,nai Shalom, then reinvented due to the deinstitutionalizing of the state’s mental health system as a “community house,” and finally evolving into its current use an historic two family?

Guide R. Christopher Noonan is a historic preservationist and historic real estate specialist and will address Westborough’s oldest downtown neighborhood.  Luanne Crosby, troubadour and songwriter/singer, will entertain the audience with some appropriate ditties and sing her 300th Anniversary Song, a tribute to the town’s evolution. Guest Speaker will be Westborough’s own Lizotte Family of Westborough Design Center located at 3 Ruggles Street.

Please check www.westborougharchive.org for a full listing of Walking Tours for 2018, and downloadable booklets that will accompany each tour. 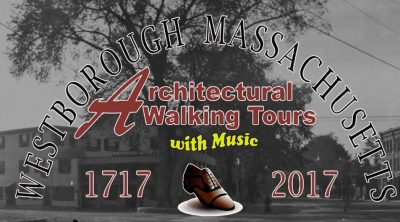