WTV recorded the July 21, 2016 presentation of “Into the Night: Exploring Moths & Other Nocturnal Insects” at MassWildlife Headquarters. Watch the full presentation here. MassWildlife’s Invertebrate Zoologist Michael Nelson helped participants discover a world of beautiful colors and patterns and extraordinary diversity by explaining some simple techniques to observe moths. He offered luring techniques and rearing methods as well as identification tips. After the lecture, attendees had the chance to view live moths at a luring station (light and sheet) outside the building. 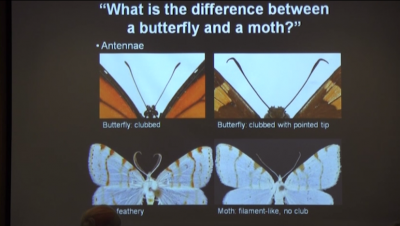 MassWildlife is celebrating 150 years of conservation in 2016 with a monthly speaker series. Be inspired, hone your skills as a naturalist, and try something new! Hear from our biologists and our partners as they discuss current conservation issues and programs. Learn how you can contribute to projects that rely on public input and observations. All talks take place at 7:00 P.M. at MassWildlife Field Headquarters, 1 Rabbit Hill Road, Westborough, unless otherwise noted. For more information, visit: www.Mass.gov/dfw/conservation-connections
Below is the schedule for upcoming presentations/events:
August 4: Prescribed Fire: Maintaining and Restoring Wildlife Habitat throughout MA. Did you know that many rare plants and animals in Massachusetts rely on periodic fire to thrive? Join Tim Simmons and Caren Caljouw, both part of MassWildlife’s prescribed fire team, to learn how these special fire-adapted communities are being restored on public lands like Inland Barrens in central Massachusetts and Sandplain Grasslands on the Cape. Also, find out how members of the public are helping catalogue these fire-adapted habitats.
August: MassWildlife Habitat Showcase Walks in Hardwick, Falmouth, Montague, Windsor, and Newbury. Walks will take place at various dates during August, check Mass.gov/dfw/Conservation-Connections for updates.
September 18: Sandwich Fish Hatchery Tour. Did you know that the Sandwich fish hatchery annually produces about 75,000 trout that are stocked into Massachusetts water bodies? The Sandwich facility is the oldest of MassWildlife’s five fish hatcheries. Join us for a tour of the rearing facilities and raceways and see Brook, Rainbow, Brown, and Tiger Trout in different stages of growth. Check Mass.gov/dfw/conservationconnections for tour times and details.
September 22: MassWildlife Hatchery History. Shortly after its founding 150 years ago, MassWildlife began rearing and stocking fish. In fact, Massachusetts was the first state in the country to initiate a fish culture program. Today more than 500,000 trout are produced by the Division’s five fish hatcheries for anglers across the Commonwealth to enjoy. Join Ken Simmons, MassWildlife’s Chief of Hatcheries, for a fascinating look at the history of the agency’s longest running program. Also, historical photos and other artifacts from the hatchery and stocking program will be on display.